AngularJS Web Development Tools, and Benefits: Decoding everything about AngularJS 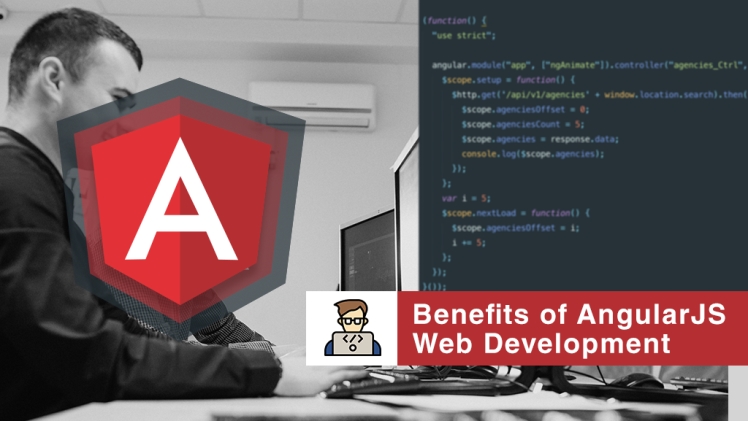 Do you wish your web application to be seamless and follow a dynamic pattern? And do you also want to offer an enhanced user experience to audiences? If yes is the answer to both these questions. You needed to hire an AngularJS development company immediately.

Now, you must be questioning why you should go for AngularJS? If you are new to it, you miss out on one of the most popular software development tools today. The tool came back in 2010 and has been the favorite of all web development companies. In fact, as per many surveys, this tool is the most employed framework after JQuery. So, if you are looking to develop an app for your business, here is why you should go for it for your web development.

As per the survey of stack Overflow of 2019, AngularJS is the most used framework by developers around the world. And about 50% of the developers who responded were full-stack developers. And about 17% of them consider themselves mobile developers. All these back ends, full-stack, and a frontend developer agree that they employ AngularJS to develop any app. It is because; It is a seamless framework that saves them a lot of time and offers a high-quality web app.

IN brief about AngularJS

This framework is an open-source JavaScript framework that enables all  Web development companies to develop web development that will rule the game. Two engineers from Google came up with the traditional versions of AngularJS. Misko Hevery and Adam Abrons are the two names behind the success of many web Developments. However, it is also a fact that this framework has only been developed for the company’s internal use. But soon, Google officially launched this open-source framework in the year 2010.

Not less than a revolutionary framework, AngularJS is now ruling the industry of development services. This is one of those frameworks that have successfully gained developers’ trust and has been employed in frontend development since its launch.

But one of the primary significance of AngularJS that makes it popular among all the developers is; it allows front-end developers to top translate their HTML documents into dynamic contents. Now, this is what makes web development more seamless.

Further, with powerful tools and MVC design AngularJS is now the top choice of developers in the industry. And it becomes more convenient when you are developing single-page apps. So, this is why it is ruling among the developers. Many leading industries like PayPal, Upwork are choosing the framework to build their business websites/applications.

But one of the significant drawbacks of AngularJS is it could not meet the growing demands of the market. It could not go hand in hand with all development trends. So, the team then comes up with an improved version of the framework. And this new version is Angular 2+.

The team, to meet the demand of the evolving market, rewrote the complete code. They came up with a revised framework of the same that has modern features. With this new release, the framework now comes with component-based architecture and an efficient command-line interface. After the Development of Angular 2+, Google is always coming up with new frameworks for AngularJS.

Why should you employ AngularJS for your web development?

Picking up the right technology stack has always been the need of the hour. If you are developing an app for your business, you need to develop a custom stack. And when it comes to custom stack, Angular has always ruled the game among the popular website development stacks.

It eases the whole process of Development for all the frontend developers. So, as a leading website development company, you must employ the Angular JavaScript framework to develop your company’s app. If you are still not clear about the perks of AngularJS, here is why you should go for it in your web development process.

The best thing about AngularJS is; it has a modular composition. This modular composition allows the organization of app codes into different buckets. So, this makes all those components, directives, pipes, and services of the app to be arranged into a distinct bucket so that you can build them seamlessly.

Further, this composition also allows you to separate all the apps’ overall functions into specific features. And these chunks of codes are also reusable. This, as a result, also makes it seamlessly easier for you to segregate the labor amongst Angular Developers.

On the other hand, the modular composition of AngularJS helps all web applications to initiate lazy loading. With the lazy loadings, the web browser comes with different features of the web app in the background. Further, this, as a result, helps the users to see all those features instantly and use it from their viewpoint.

Ease in the process of Development is what makes AngularJS one of the most loved frameworks. So, another advantage of AngularJS that offers you seamless Development is its component-based structure.

The AngularJS framework segregates the user interface of the web app into several free logical components. And all these components are arranged like a tree following a strict hierarchy. So, this brings you to a point where you can compress those elements with similar functionalities. Further, they are also well-defined components.

As all of these components are not dependent on each other, you can reuse them for almost every part of the application that needs the same functions. In this way, you don’t have to rewrite the codes for your web app’s same functions. It saves time and increases productivity, as well. So, that is what makes AngularJS one of the most popular frameworks for developing any UI.

Concluding, in this above point, you can say that all the components of AngularJS are loosely linked. That makes it easier for you to detach the links you don’t want in your web app. Further, the independence of components also allows you to test every small part of the app that you are developing.

This refers to a design pattern in which one part of the program depends on another part. When you employ AngularJS for the Development of your web app, it runs all the dependencies parallel to their components. As a result, all the classes depend on an external source, despite possessing them within. And this creates a tree of dependency injectors—further, all these dependency injectors change without reconfiguring their components.

On the other hand, this hierarchical composition of dependency injections also specifies links between all the elements and organizes all these components into distinct classes. It creates a transparent relationship stating how modification in one element can impact another element’s function. This, as a result, helps developers enhance the quality of the app code; and makes it easier to maintain.

Now that you know the point of employing Angular, you must move on to the features of AngularJS. And that brings you to the below part of the article, where you will know about its features.

Keeping this short, this is all about the features, perks, and significance of employing AngularJS in your web app development. However, listing down all the perks will make you fall short of words. If you are looking for a robust framework, you must consider it. This is the only robust framework that offers seamless website development and saves your time as well.